10 Fun Facts On The Bug Everyone Loves To Hate: Spiders

They may not be as gross and dirty as cockroaches, but most people agree that spiders are the worst when it comes to bugs in our homes. Arachnophobia is one of the most common fears across the country. All that being said, when you take a moment to learn about these insect predators, you’ll find that spiders are some of the most fascinating critters the animal kingdom has produced.

10 Things You May Not Know About Spiders 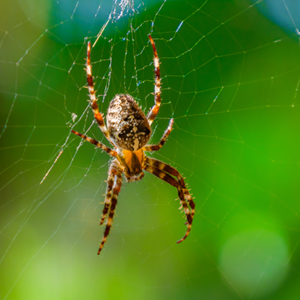 Spider’s silk, the thread they produce to weave their webs, is actually one of the strongest natural substances out there.  It’s created from proteins, and the amino acids that make up those proteins determine how strong or flexible the silk is. Spider silk is comparable to Kevlar in terms of toughness – yes, that Kevlar; the material that stops bullets.

Mammals, including us humans, have red blood because our bodies use hemoglobin to transport oxygen. Hemoglobin uses an iron atom, hence the reddish color – the same iron that causes rust on metal! Spiders, on the other hand, have hemocyanin, which uses copper to bind oxygen. Copper produces a blueish hue, and so the blood of spiders is blue!

Everyone knows that spiders weave webs in the hopes of catching a tasty bug treat, but did you know spiders create nets and traps like humans? It’s true! The ogre-faced spider weaves a small net and holds it between its two front legs. When a potential meal comes along, he scoops it up just as a human would use a net for fishing! That’s pretty clever for a bug! And without these multi-legged predators, insect control would be impossible. They consume more bugs than birds or bats, helping keep the insects from becoming so numerous they would destroy the planet.

The fossil record shows that spiders have been around for at least 300 million years – older than humans, mosquitoes, and dinosaurs!

5. Tarantulas Use Their Fuzz As A Weapon

While Michiganders won’t encounter a tarantula unless we’re in the southwestern desert, you might want to know about their defense mechanism if you ever cross paths. Tarantulas are known for being fuzzy, but those hairs aren’t just for looks. Tarantulas can fling those hairs at predators, which leads to a very stingy situation. These hairs create a burning, stinging sensation, which is incredibly painful.

It turns out eight eyes are better than two. And some species can see multiple types of light, including UVA and UVB. If you could sit down with a spider and ask it to watch an O-LED tv with you, they’d probably have a far better time. As good as we believe the colors of a new tv to be, spiders can see colors we can only imagine.

Spider webs are rich in vitamin-K, which helps blood clot and stop bleeding. And the silk is naturally anti-fungal and antiseptic – which is perfect for dressing wounds. Now, unless you’re in a very remote location, it’s not a good idea to go sticking your hand into a web, or you may end up with a big old bite. However, scientists are studying these properties to create a more natural and effective way to treat cuts and scrapes.

Well, sort of. If you’ve ever wondered by they never seem to get caught in their web, it’s because of special hairs on the end of each leg. These hairs reduce the surface area that touches the web, which means the spiders walk on their tippy-toes. That’s why they can scurry across their web while other bugs become lunch. 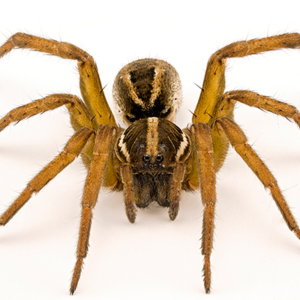 You’ve probably encountered a wolf spider in your basement or attic. And if this happens frequently, Alpine’s perimeter pest control services can help with that! They’re pretty large and often mistaken for the infamous brown recluse spider. However, wolf spiders are probably the fastest spider you can find in Michigan. When needed, they can run as fast as two feet per second!

10. Some Spiders Are Cannibalistic

Though it’s not known for sure, researchers think that male black widow spiders choose to sacrifice themselves to the female so that their species can endure. Many males NEVER find a mate, so when they encounter a female black widow, they have to do everything feasible to get her to choose them. Offering themselves up as a post-coitus meal ensures the female will select them and she has nutrients to grow her eggs. And if you’re wondering, yes, that is where the name “black widow” comes from.

The experts at Alpine Tree and Lawn Care not only provide traditional tree and lawn care services – we can help with your pest problem as well! Our perimeter pest control services will seal your property with a protective barrier, effectively eliminating all crawling insects that attempt to cross it. Enjoy peace of mind in your home without all the creepy crawlies! If you’re interested in learning more or are ready to schedule an application, give us a call at (586) 884-7799 or send us a message through our online form here.

And for more tips and information on maintaining a healthy yard and pest-free home, be sure to check out our blog page and follow us on Facebook!