Stop Overwintering Insects From Invading Your Michigan Home This Fall

September is here, and with it comes shorter nights and increasingly cooler temperatures. You may think that you no longer have to worry about pesky bugs during this time, but you are mistaken. Fall is when pests become an issue. As the weather cools, insects such as the stink bug, boxelder bug, and Asian beetles begin to look for warm places to spend the winter.

We call this overwintering. Just like you, insects need food, water, and warmth to survive. In the winter, these things are hard to come by. That’s why many insects will take up residence in your home and lawn. Overwintering is the process by which an animal or insect spends the winter. For many Michigan insects, that means getting warm and cozy in your home. Let’s discuss a few of these pests. 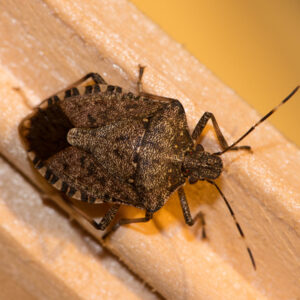 These odorous pests are pretty new to the U.S. They originated in Asia and were only introduced to the U.S. in the late 1990s. They can be identified by their shield-shaped body, the white bands on their antennas, and of course, the odor they emanate when killed. To survive the winter weather, stink bugs need warmth. As the temperatures fall, stink bugs will congregate on the sides of houses and other buildings. If there is a crack or a gap anywhere on the house, brown marmorated stink bugs will squeeze into your home and take up residence. The worst part? Where there is one, there are sure to be more. Sometimes dozens more, hundreds more, even thousands more! The best way to prevent stink bugs? Seal up any gaps, cracks in the walls and holes in window screens, and invest in an outdoor perimeter pest control like the one we use at Alpine Tree and Lawn Care.

Boxelder bugs are common insects that feed on sap from leaves, twigs, and the seeds of boxelder trees and other maple family members and ash trees. They are harmless and do not typically damage your home structure but can become a nuisance when moving in and out of the shelter in spring and fall. The adult boxelder generally is a half-inch in length and black with red-rimmed wings. As they look for protection to weather the storms of winter, they’ll search for cracks and crevices, and you’ll find them crawling around your windows and windowsills. It is not recommended to kill box elder bugs because dead insect bodies can attract dermestid beetles such as carpet beetles and larder beetles that can damage carpets and cause rashes on the skin. The best way to remove them is by sucking them up with a vacuum cleaner. 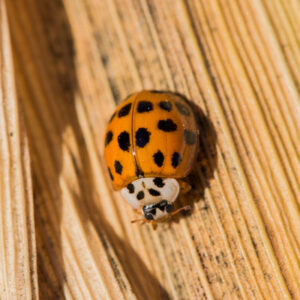 Due to their similarities in appearance, Asian beetles are often mistaken for ladybugs. While ladybugs are native to the United States, Asian beetles were brought over to the U.S. by the Department of Agriculture in the 1960s to control pest populations that were damaging crops naturally. As Asian beetles seek shelter, they seek protection inside and outside buildings, including your business and home. They congregate in attics, ceilings, and walls while seeking protection and warmth for the winter. While Asian beetles do not cause any structural damage or lay eggs inside your home, they can release a smelly substance from their joints used as a defense mechanism.

The best way to prevent an infestation from occurring is by caulking any gaps and cracks around the exterior of your home along with sealing doors, windows, and any openings around pipes. We also highly recommend investing in a perimeter pest control service, such as the one we provide here at Alpine Tree and Lawn Care. Our 5-step application program helps provide an invisible shield around your house to keep annoying pests such as those listed above outside where they belong.

Get started on prevention now before it’s too late and contact the pros at Alpine. Call us today at 586-884-7799 or contact us online here. Want to get to know us on a more personal level? Follow us on Facebook.